We hear the world differently. (photo by Zach Lipp)

This is a major source of support that keeps us going.

The entertainment world is terrified to lose advertisers. So terrified that they dumb everything down, make sure they have enough minorities in the cast of every show they produce, and try to keep the risk of offending people to a minimum.

People get offended no matter what you do. Fortunately it’s only about 10% of the actual audience that sees whatever it is you’re peddlin’. And even more fortunately, that 10% is made up of about 98% whack-jobs.

So how can you help us change the world?

Simple. Treat people like people, regardless of their handicap, disease, sex, race, food preference, musical likings… the only people who deserve intolerance are the intolerant. A-holes don’t need your attention. They are the way they are because they are starved for that attention. So starve them completely. Spend your energy learning about the things you don’t understand, like Down Syndrome. If you know someone with Downs, say hi. Chit chat with them. That’s a good place to start.

Spread love, not hate. Cheesy, simple, yet right on the money. Send our videos to people you know. Introduce them to Ponce that way. Let them see how much he has done in this life. When he was born the doctor told our mother to put him in an institution, that he would never be a useful member of society. That doctor is dead. Ponce is alive. And Ponce has done more good in this life than that dead doctor could have ever dreamt of. If it was up to him, Ponce would have been aborted. PONCE FTW!

Knowing that the videos we make help to open people’s eyes is what fuels our creativity and our drive. Pass us around, especially to the people you think might not get it. The ones who are set in their ways, a little uptight, you know who they are. Throw the opposite of the stereotypes they have accepted in their faces and give them a chance to grow.

Again, we thank you all for your support. We are truly blessed to have a voice in this loud, nasty world. If you guys keep holding up the megaphone we will keep shouting.

Click here for the latest UPDATE on our situation with the Retarded Policeman series and mediocrefilms.

Kurt Russell at his best, the badass hero that doesn’t show his physical badassness until the end of the picture, and even then he’s got lipstick on his face. Watch it, you’ll get it. There’s also a ton of testosterone loaded one-liners… “Everybody relax… I’m here.”

Kim Cattrall, James Hong, and Victor Wong kick much ass in this ahead of its time classic. Special FX are totally on par with Ghostbusters and look better than a lot of the CGI bullshit being produced today. (What the hell happened to George Lucas?)

This is John Carpenter at his best, from mood, to story, to score, this flick delivers the goods. And a big shout out to DP Dean Cundey. 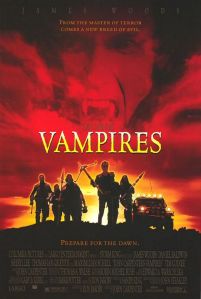 This one is tough because it is definitely NOT a good movie. It IS, however, extremely entertaining.

James Woods is a kickass Vampire hunter, hands down. And, believe it or not, Daniel friggin’ Baldwin actually turns in a funny, focused performance as his sidekick. The drag here is that the whole film feels very much like the first draft of a good idea that never got fully worked through before the cameras rolled.

Like all Carpenter flicks there are some great one-liners… Woods to the OG Vampire, “Let me just ask you one thing – after 600 years, how’s that dick workin’, pretty good?”

The leading lady performance ain’t so grand here either. But if you’re up at 3AM and want to stop flipping through the channels, this is a good flick to stop on… and even though it isn’t a GOOD movie it still kicks the shit out of that “Twilight” turd.

“John Carpenter’s Village of the Damned” 1995

This is the kind of thing that makes me sad. Great director doing a studio picture and, for whatever reasons, it just comes out like this… forgettable.

The casting is odd. Christopher Reeve, Kirstie Alley, and Mark Hamill… all very uncompelling in this piece. And the script itself just makes us all suffer form all the things that just don’t work. To sum up, no kids, even from outer space, would wear the ridiculous clothes or sport the faggy, yes I said it, faggy hairstyles these kids are pimpin’. We also jumpcut at least 8 years into the future but nobody in town, except for these demon alien children, ages.

For the first 15 minutes of this film you might be drawn in, but once the creepy cool opening is done and the actors regain consciousness it just kinda goes limp. Not completely limp… you can still hump a little, but why would you want to.

This flick and the original both show up somewhere in cable heaven every month or so, so Tivo that sheeyot! They are both worth watching. Carpenter’s especially so just to see how a really great director can helm a movie he most likely doesn’t really care about and end up with a movie that not many people really care about.

NOTE: I wish every bad movie out there were as good as the worst John Carpenter film so I wouldn’t feel gypped out of the precious eyeball time I spent watching the cinematic wastes of space.

“Big Trouble In Little China” GOOD
I love the action. Kurt Russell’s a badass and my favorite character is Egg Shen. I like when Kurt Russell says to him, “How’d you get up there?” and Egg says, “It wasn’t easy!”

“Vampires” GOOD
I like it and bro thinks it’s not good but he still likes it too. James Woods is a badass in it like a hard muthafoko. And my favorite is when he tells the Cardinal “You are truly a pile of dog shit, Cardinal.”