Most powerful superhero in the 1950s.
Unfortunately, she was a female.

The Senior Citizen Superhero. She’s badass, stylish and she’s gettin’ too old for this shit. The Mighty Maven is another favorite, mostly because she’s played by my grandmother, Mema.

I wanted to do a superhero that suffered from chauvinism, but chauvinism that was widely accepted as the way things should be. America has a huge history of wrong ideas accepted as the norm. From slavery to lead paint the fruit was ripe for the picking. The fact that women, until very recently, were supposed to stay in the kitchen and have babies became the basis for the Mighty Maven’s backstory. She could stop a bus from going off a cliff with her little finger, but the US military didn’t want that kind of publicity. They would kindly say “thanks,” followed by a “now get back in the kitchen, we’ll take credit for this.” 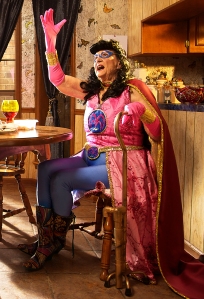 With her Bazooka Blaster Quad Cane

The design was a classy, elegant superhero. My mother had the dress and cape already made. We modified them slightly to add that superhero zing. My sister stepped up and designed and fabricated her symbol. We went with the classic, long ballroom gown gloves and gauntlets that were more like fancy gold bracelets. Tights and psychedelic boots rounded everything out with the finishing touch of the classic ’50s era thin superhero mask. And sticking to the militant minded 1050s we made her a Bazooka Blaster Quad Cane, for the superhero that needs some walking support.

I grew up with Mema, she was VERY present in my childhood. In many ways she was more of an influence on me than my parents were. I lived with her from the time I was 14 till I moved away to Austin when I was 19. She has a very dry, biting wit. She’s also someone that doesn’t take any crap from anyone. 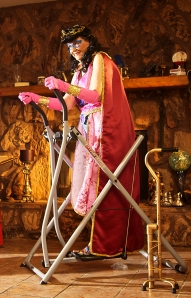 Gettin’ her Gazelle on

The shooting was pretty painless. The kitchen and the Gazelle shots were both done at my parents house in Lafayette. We actually shot them around midnight so that beautiful daylight you see streaming in from outside is all the brilliance of Eric Curtis’ lighting. The night shot in the garage is also at my parents’ home. The drooping fan blades and all the other “props” are all really there, all actual items found on location. The park shots were done at Chargois Park in Lafayette. The water-tower shot has one of the only photoshopped photos in the book. We added the smoldering squirrel to the image, only because it was too difficult finding an actual smoldering squirrel for the shot. And if you look on the swingset you will see my sister, Stacey, her daughter Mya, who is also in the “Passing the torch” shot, and Josh “the Ponceman” Perry swinging on the monkey bars.

So, the Mighty Maven was cranked out in a few hours. 4 shots from 11PM to 1AM, and 2 shots about 3 months later from noon to 2PM. Pretty efficient shooting. And the generations from Mema to Mya captured is an extra sweet personal bonus for me.

NEXT UP: Shock Mama modelled by Amanda Lyon